A good gaff is extremely valuable but too often overlooked by fishermen. With all of the rods, reels, and other flashy equipment out there, gaffs can mistakenly tumble down the boat checklist.

It’s absolutely worth it to have a well-made gaff on every boat. There are simply far too many fishing scenarios that call for one and it pays to be prepared with the right tool for the job.

I’ve found that there are a lot of options out there and a surprising lack of information. That’s why I decided to write this short guide to my favorite type of gaff and why it makes the most sense for every style of fishing. 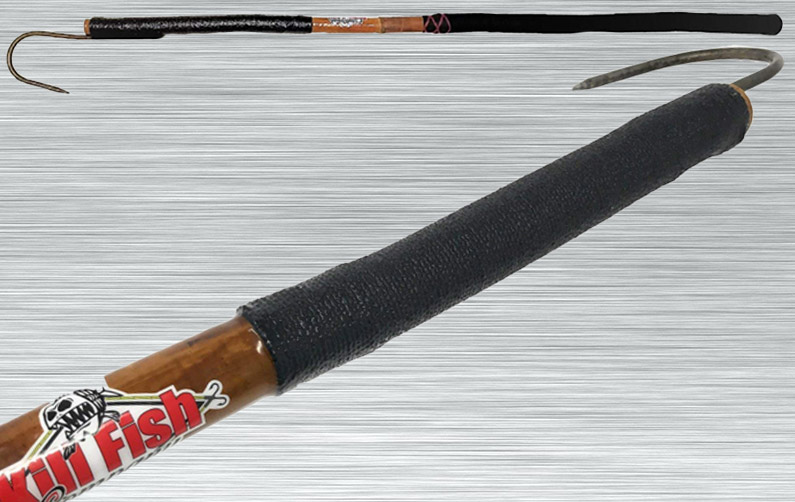 I never thought I’d be overly excited about a gaff. Then I came across one of these a while back and immediately loved it. You’re not going to find a better gaff anywhere. Kill Fish Company has built what I believe is hands-down the best gaff on the market, especially for the price.

Kill Fish imports real-deal Calcutta bamboo to build this product here in the USA. They go the extra mile in treating and completing the bamboo shaft to give you the perfect grip and leverage. It also looks great, but that’s just a bonus. They have sizes that will fit anyone’s needs. Kayak fishermen will be glad to know that the 3′ length that comes with a wrist strap.

The hook is equally awesome. Rather than just throw on some mass-produced third-party hook, Kill Fish changed the game and created their own. They built a hook that is essentially a stainless-steel spear shaft, bent into shape and heat-treated. It won’t rust and it’s ridiculously strong. To top it off, they welded a second prong to the hook. This makes it far more secure than anything else and eliminates any chance that it will spin loose.

Last but not least, Kill Fish Co. is an awesome company owned by guys who love to fish. When you buy one of their products, you’re getting something that was custom-designed and hand-crafted by people who love and understand fishing. They sell their products on Amazon, so you get the best of both worlds- small business craftmanship and care with the convenience of the world’s most efficient marketplace.

The value really is outstanding. I’ve seen guys custom-make inferior Calcutta bamboo gaffs and sell them online for more than double the price.

If you’re still on the fence, you probably won’t be after watching this video featuring Kill Fish Co’s co-founder Kevin Fortmeyer:

Most fishermen have probably laid eyes on a bamboo gaff at one point or another. They’re a common fixture on many an offshore vessel, commercial and recreational alike.

At first glance, you’d probably assume that they aren’t as effective as an aluminum or fiberglass gaff. That’s really not true at all. A good bamboo gaff will perform extremely well and outlast many comparable metal gaffs

There’s also a style-factor involved. Whether or not hardcore fishermen will admit it, there’s an undeniably cool look and feel to a handmade bamboo gaff. A well-made, handcrafted bamboo gaff is just as much a workhorse as it is a work of art.

The tensile strength of Calcutta bamboo is amazing. Calcutta is far thicker than most other types of bamboo and it’s almost unbreakable. You can flex it just enough without worrying that it won’t snap itself right back into form. This isn’t the case for many other gaffs. Bend a metal gaff and it’s probably going to be stuck that way.

It’s borderline impossible to break Calcutta bamboo within the bounds of normal use. The average person would have an extremely tough time exerting enough force to split it.

Keep in mind that I’m making sure to note that we’re talking about “Calcutta” bamboo here. Other types of bamboo don’t compare and I wouldn’t recommend them for any type of heavy fishing use.

Calcutta is a species of bamboo native to South Asia. It has been commonly used throughout history in everything from house frames to concrete reinforcement to lance shafts for the British army. Landing a fish is comparatively light work compared to those things.

It Will Always Float

Yeah, this seems like a simple thing that all gaffs should accomplish, but you’d be surprised. There are tons of gaffs out there that don’t float at all, which is just impractical for 99% of fishing applications. It’s not a matter of when your gaff will go overboard, it’s when.

A bamboo gaff will come right back up to the surface the moment it releases from a fish. Some metal gaffs will float for just a second before they fill up with water, but a bamboo gaff is buoyant enough to hold itself up. Hook size really doesn’t matter and there’s really nothing out there big enough to pull down a normal-sized Calcutta bamboo shaft.

It Will Last A Very Long Time

We all know the effect that salt has on your fishing equipment. Metal gaffs are no exception and that’s why bamboo is a refreshing option.

Aside from the hook (which shouldn’t be a problem either as long as it’s high-quality steel), bamboo is essentially salt-proof. The construction is so simple and it involves only a few materials like bamboo, cord, and maybe some type of adhesive compound. If you take care of it by giving it the occasional rinse and storing it somewhere out of the sun, a bamboo gaff will outlast plenty of those made out of metal.

Kayak fishermen will especially appreciate a bamboo gaff. No matter how you slice it, gear in a kayak gets wet more often than gear in a big boat. A bamboo shaft will handle regular salt baths a lot better than options with metal components.

I don’t care who you are or what you have on your boat, there’s something to the old-school look and feel of a natural bamboo gaff. They make plain-Jane West Marine gaffs look like crude substitutes.

Every Calcutta bamboo gaff I’ve ever seen has been handmade and high-quality. The work that goes into making one isn’t overly complicated, but it takes a level of skill. You know when you see one that they put a little more “art” into what would typically be a standard, boring piece of equipment that you stash somewhere in your boat.