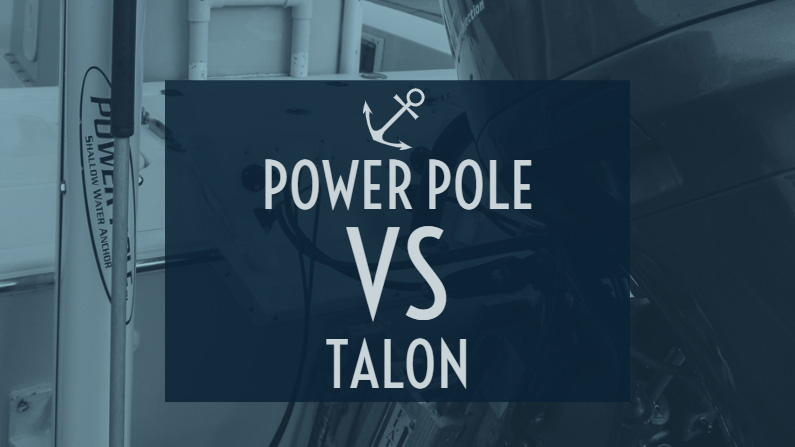 Most boaters can’t imagine life without a Power Pole or a Talon. Shallow water anchors have completely revolutionized boating over the last twenty years and gone are the days of throwing out a heavy anchor every time you need to sit still.

There is a great debate is over which system is the best. Both the Power Pole and Minn Kota systems offer a ton of upside whether you’re hardcore fishing or just recreationally boating with the family, but there are some big differences between the two.

I spent some time testing products, doing research, and talking with the experts in order to create the best possible resource for buyers. The goal was to get all of the pros and cons in one place with all of the details. I use Power Pole myself, but I’ve continued to look at Talons every year to see how they’ve come along.

So let’s settle this once and for all. Or just pour more fuel on the debate!

That’s the extra-abbreviated recommendation for anyone who is looking for the short and sweet. There’s obviously a lot more info and nuance to this comparison, so read on!

You’ll find both units’ features broken down and detailed below. For convenience, we’ve broken down the comparison in a handful of categories. All of the categories were chosen for their importance to the overall use of the two systems.

Note: This comparison was built with each brand’s flagship 10ft model in mind, but all of the info here is relevant across the board from model to model.

Deployment is the first and biggest difference between Power Poles and Talons. Power Poles are deployed in a fold-out manner that extends the entire unit down behind the boat. Talons are deployed straight down while the outer casing of the unit remains in a fixed position.

Here’s a video that gives you several good views of the Power Pole style deployment in action:

We prefer Power Pole’s deployment style for a couple of reasons. First of all, once you deploy a Power Pole, it’s in the water and out of your way. You can walk around without the unit getting in your way while you’re trying to cast or do anything else in the back of the boat. It also simply looks nicer to get the unit out of your view while you’re anchored up.

The second reason we prefer Power Pole’s deployment is that, when it’s down, you know it’s down. You may wonder what we mean by that. It’s simple- a deployed Power Pole moves the entire unit, while a deployed Talon only moves the unit’s secondary stages and looks exactly the same as an undeployed Talon.

Here’s a video from Minn Kota that shows you how their system works:

You can see how the vertical deployment leaves the Talon’s first stage in a position that looks the exact same as it does when it’s not deployed. This isn’t the end of the world, but it’s inconvenient for two big reasons. The most obvious reason is that it’s always in your way. The second reason isn’t as obvious, but it’s just as important.

Since a deployed/undeployed Talon looks the same from inside the boat, it’s easier to make the mistake of trying to drive off while it’s still stuck in the ground. Minn Kota makes an effort to solve this with an indicator light on top of the unit and with an optional alarm that can be wired into your boat. The problem is that the light can be sometimes hard to see in bright daylight and the alarm, like all boat-related products, is hard to trust by itself.

If you make the mistake of taking off with a Power Pole still deployed, it will raise up. Make that same mistake with a Talon and you could be looking at some costly damage to the unit or to your fiberglass. I’ve heard a few firsthand accounts of folks who had to do fiberglass repairs after Talon mishaps. Mistakes happen to the best of us, so it’s always worth considering.

Honestly, there’s really not a big difference one way or another in holding power from a Power Pole to a Talon. Both do a good job of keeping you held into place.

Testing each unit led to very similar outcomes and talking with the pros did too, so this is one area that you shouldn’t spend a lot of time worrying about. Either option will dig in and hold you where you want to be. Of course, some people swear that one holds better than the other, but it’s a coin flip at best from our experiences.

Now, this doesn’t take into account the length of the anchor. If you’re looking for the deepest possible shallow water anchor, Talon wins. Their multi-stage design has made it easy for them to offer a few longer options for anchoring in deeper water.

No matter what you choose, you can usually expect for your system to adequately hold in about 1′ to 2′ less water than what the unit measures in at. For example, an 8′ Power Pole will likely struggle at anchoring in 8′ of water, but it should have a very good hold in 6′ or 7′ of water.

In terms of straight-up depth performance, the 15′ Talon is about an absolute beast.

Reliability is the most important equipment factor for a lot of boaters. Boats have enough issues as is and no one wants another piece of equipment regularly breaking down. The less required maintenance, the better.

Power Pole wins the reliability contest pretty easily. This is mostly due to the Power Pole’s hydraulic system versus the Talon’s electric system. This is an even bigger factor in saltwater environments.

Saltwater boating veterans are well aware of the headaches created when you mix electronics and salt. Even though the Talon’s design is pretty solid, it still can’t really compete with the operating efficiency of the Power Pole’s hydraulics. The pumps that operate the PP will fail a lot less than an electric motor.

Adding to Power Pole’s reliability advantage is that the Talon’s secondary stages retract pretty snugly back into the main stage. This makes it more difficult to keep the Talon clean when the gunk and grime finds its way into every nook and cranny.

Power Pole wins the weight battle against Talon with every comparable model. The internal mechanisms of Talon units are quite a bit heavier than those of the hydraulic-based Power Pole.

If weight is a determining factor for your setup, Power Pole is the clear choice. The 8ft Power Pole Pro II Series is an especially light option, coming in at just over 26lbs. It’s also a bit cheaper than the Blade.

In boats with limited space (bass boats are a good example), Talons excel. This is due to their lack of hydraulic pumps. Pretty much everything in a Talon system is self-contained within the unit. That’s one of the major benefits of having electrical components.

Installing a Power Pole means that you have to find some space to install its pump system. Not a problem on many boats, but it can be an issue if you’re already low on space.

In addition to saving you space with a lack of pumps, a Talon’s self-contained system allows you to easily pull the entire system off of your boat when you don’t need it. This also means that it’s very simple to use one Talon on multiple boats by simply switching it over. That’s huge for a lot of boaters.

A comparable Talon will always be somewhat quieter than a comparable Power Pole. That just comes with the territory when comparing electronic operation to hydraulic pumps.

Noise isn’t a big deal in most applications, but it can sometimes be frustrating for fishing scenarios that call for as much silence as possible.

I wouldn’t recommend letting the noise factor make your decision for you either way. Worst case, you can always turn down the speed of a Power Pole to make it as quiet as a Talon. Sacrificing some speed won’t matter much 99% of the time.

Seriously, it’s borderline impossible to talk to a handful of Power Pole owners without hearing them sing the praises of the customer service portion of the business.

I’ve heard countless stories of owners experiencing a problem, calling Power Pole, and receiving replacement pieces free of charge. Now, I’m not suggesting that having a Power Pole means having access to an infinite amount of free stuff, but I am saying that it’s far more likely to happen than with Minn Kota. The Power Pole people are just very dedicated to standing behind their product.

That kind of customer service is a godsend to anyone who knows what it’s like to own and maintain a boat. Things are going to break and it’s no fun to battle with a company’s customer service department when they do.

This comparison should cover most of the basic details necessary to start coming to a conclusion on what works best for your boat. There are good reasons to use either option, depending on your personal needs and preferences.

Overall, we feel that a Power Pole is the superior choice for the vast majority of boaters. They really do an awesome job of performing well while taking some serious abuse. Add in the industry-leading customer service, and it’s an easy call for most. Just a really solid product all around.

Though we recommend Power Pole first, we wouldn’t at all suggest that Minn Kota makes a bad product with the Talon. If you’re limited on space or you’d like to use a single system on more than one boat, the Talon can still make a lot of sense. They also seem to get a little better with each new model.

Let us know what you think! No matter which one you go with, we’d love to know how you made your decision and how you like it!