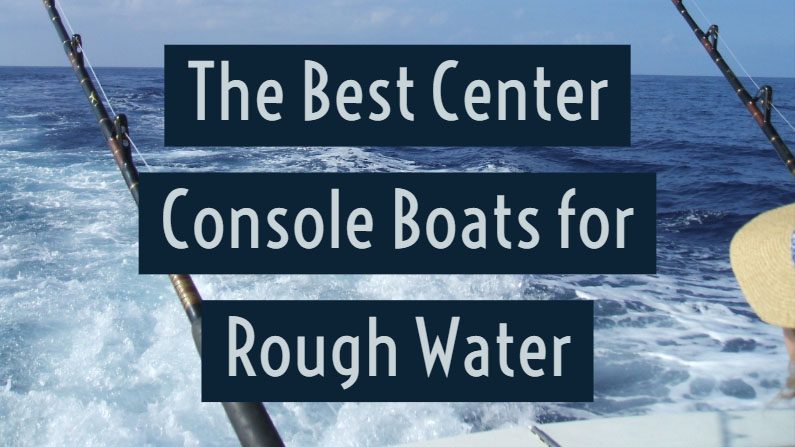 No one likes being knocked around in rough water. Even less so when you load your family and friends on board.

If you’re going to buy a center console boat, it’s inevitable that you’ll often find yourself in some variable conditions. It’s just the nature of the beast. May as well do yourself a favor and choose a boat that can take some abuse while keeping you comfortable at the same time.

I’ve put together a list of some of the best riding center console boats in the industry. The boats on this list vary in size, but they’re all top-notch choices in their respective classes for handling rough seas. I’ve categorized them by size in order to simplify things.

Also, it goes without saying, but just to be safe: Always know the limitations of your boat and your skills as an operator. Just because one boat rides better than another in “rough water” doesn’t mean that it’s safe to take on Poseidon’s fury.

Research on, my friends! This should get you started on your way to finding the right fit.

This is the smallest Center Console group on the list. I’m sticking between 20-25ft for this one, as I personally don’t recommend the vast majority center consoles under 20ft in rough seas.

If you’re on the fence about a 20ft+ boat and you plan on going anywhere near rough seas, go ahead and save some extra money to make the jump. The comfort and (more importantly) safety is 100% worth the extra money.

Spoiler Alert: Regulator will make more than one appearance on this list. Regulator builds an outstanding boat and they are borderline legendary for their comfortable ride in rougher seas.

The Regulator 23 is no exception.

This center console measures in at 23’5″, but don’t let its size trick you into believing it’s a small boat. It looks and feels much bigger than it really is, making it a pound-for-pound beast in rough waters.

The 23 can take whatever you can throw at it within reason. It has absolutely no problem outclassing plenty of boats that, on paper, measure far bigger. The build quality is awesome and features some of the best stringer construction on the market- perfect for taking offshore abuse with a smile.

If you want a sub-25ft center console that can take some heat, it’s extremely, extremely hard to beat the Regulator 23.

The 255 is compact, but has a deep-V hull that does a great job of slicing through rough seas. Definitely a sturdy vessel and the craftsmanship is awesome. From the hull design to the strategically-placed handles to grab onto when things get dicey, there’s a lot to like when the 255 goes offshore.

As with any Everglades boat, there’s also the top-tier style factor. The 255 looks and feels premium all over. Everglades fit, finish, and style is well known. And for good reason.

Like the 23 Regulator, the Everglades 255 is a relatively small center console that can truly outclass many bigger boats.

This is the size range that starts getting much more comfortable. Options starting opening up much more from here. For rough seas, I recommend at least making the jump from sub-25ft to 25ft-30ft.

I love Blackfins. They are basically bombproof with all of the creature comforts you could ask for in a center console fishing boat.

The Blackfin 272 carries on the time-honored Blackfin tradition of beastly boats. This thing is a machine and it performs and performs. You’ll beat the snot out of yourself long before the 272 is ready to quit.

The 272 is also beautiful. It’s sleek all over with a fit and finish to match. From the hull to the console to the badges, it’s hard not to fall in love at first sight when you see one of these roll up.

Told you Regulator would be back! Like the earlier Regulator 23 entry, the Regulator 28 is a beast in tough conditions. It’s just bigger and better.

Regulator’s 26 is considered to be one of the greatest center consoles of all time, but the 28 still manages to go one further. The Reg 28 is a monster for its size. It’s heavy, but it handles fast and efficient. It also has a huge console for its class and a flush deck. So much room for activities.

True to Regulator form, fit and finish is awesome. The 28’s hull is top-tier with some of the best stringers ever made.

You can ask almost any industry professional- this is one of the best center consoles ever made. Full stop.

Could this list really exist without Sea Vee making an appearance? The hype is real folks.

More importantly, the performance is real. It really can’t be denied how well a Sea Vee performs in nasty conditions.

The Sea Vee reputation holds up with the 290. This isn’t a massive boat by offshore center console standards, but it outperforms its size. The hull design is solid as a rock. Roll is minimal and it’s a very dry ride.

The 290 is in a sweet spot for anyone who wants a trailerable center console that can get down and dirty offshore. It’s a manageable size, but it feels much bigger when you put it in the water.

It goes without saying that any Sea Vee has the looks to go with the performance. Everyone on the water recognizes a Sea Vee the moment they lock eyes on it and the 290 will be no exception there.

I’ve got one Intrepid boat in my family already and I hope it never goes away. Intrepid builds a killer boat and I’ve spent more time on them than any other on this list.

The Intrepid 300, like all Intrepids, has a bulletproof hull that can take you just about anywhere. It does a wonderful job of cruising along at a comfortable speed in rough water. And from my experience, the build quality is as good as it gets.

Intrepid is famous for being uber-customizable. No matter what you want to do with your Intrepid, they’ll outfit you for the job. The configuration options are staggering when compared to most other manufacturers and the customer service is always as solid as the boat itself.

We’re getting into the big boy boats now. And honestly, this is where you want to be if you want maximum comfort and maximum safety. Rule of thumb with rough water is that, generally, the bigger the boat, the better.

You already knew this was coming.

In the 30ft+ category, Regulator still goes strong with the 34. Best of all, this is one of the best values in its class. Regulator recently redesigned the 34 to add even more features to an already outstanding boat.

Like the earlier Regulator entries on this list, the 34 outperforms its size. It’s a pound-for-pound beast when compared to most 35ft to 40ft vessels.

The deep-V hull is solid as a rock and the console is roomy. You can run this boat all day in rough water and stay comfortable doing it.

If you’re making the jump to a 30ft+ center console, the Regulator 34 should be the first boat you look at.

It had to show up sometime.

At this point in time, Yellowfin has achieved mythological status in the boating community. These are some of the most celebrated yet polarizing boats on the market.

But let’s be honest- 99% of the time, the only knock anyone has on Yellowfin is price. Yes, they’re not cheap. But they are without a doubt one of the best performers.

The Yellowfin 36 is like all large Yellowfin CC’s. It’s made to handle the sea and handle it with speed. You don’t buy a Yellowfin to baby it. You buy it to push the throttle down.

Variable conditions are a breeze in the 36. The hull will roll over just about whatever you want it to and it will hold up under stress. Yellowfin fit and finish is well known and, from my experience, always holds up.

Hype or no hype, the Yellowfin 36 is legitimately one of the best in its class.

Just like the 290, the Sea Vee 390 is a straight-up competitor in its arena. This is a big boat and it’s a solid one. It’s beefy all over and it will go wherever you want to take it.

Truthfully,  once you make your way to a center console of this size and price, you’re really not going to worry much about whether or not it can handle rough (but still safe) water. You should expect for this kind of vessel to handle the way you want it to and the 390 definitely accomplishes this.

It’s worth noting that the Sea Vee 390 is very roomy, especially in the back. There’s a ton of space to move comfortably move around, whether your fishing with a handful of people or cruising around with a whole boatload.

I’m going to be short and sweet on this one. The Yellowfin 42 takes some coin to acquire, but it’s always going to be one of the most capable, impressive center consoles on the market.

If the price tag doesn’t scare you off, the 42 will get you through just about any kind of water you need it to. And it will do it at warp speed.

Yellowfin is famous for building boats that can outrun just about everything else. The 42 is no exception. It’ll pop up onto plane and leave just about any boat in its class in the dust.

If you’ve made it this far, your pocketbook is definitely in trouble and you should just embrace it. On the bright side, there’s no need to worry about missing out on features. We left compromises behind a few boats ago.

The Jupiter 43 is a monster of a boat with style for days. This is the dream CC for many folks. Even smaller Jupiter boats handle variable conditions beautifully, but the 43 is simply next-level.

Basically, the Jupiter 43 is the in-between fusion of a big center console and a sportfish. To that point, it rides like a dream. It’s already a big boat, but like most entries on this list, it somehow rides even bigger.

You can go anywhere you want to go, fish for anything you want to fish for, and (no matter how hard you try to deny it) look as good as humanly possible in this boat.

Hopefully this helps you move further along in your quest for the perfect center console. Brand loyalty aside, you’d be hard-pressed to find folks in the boating community who would argue against these boats as solid riders in less-than-ideal conditions.

Let us know how you feel about this list. We’d love to know what center console you feel has the best ride. Also, absolutely let us know if you pull the trigger on one of the boats listed here!