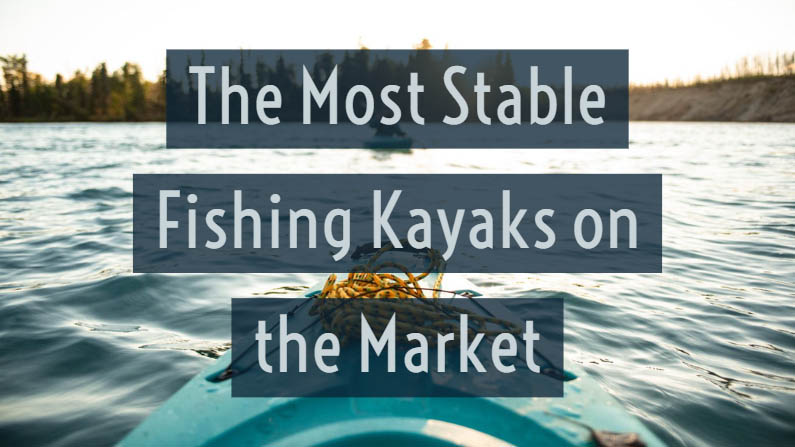 No one wants to spend their whole day trying not to drop their gear or fall out of their kayak. Fishing is hard enough work as it is. That’s why it’s a really good idea to choose a stable kayak.

I’ve spent some time rounding up the fishing kayaks that I feel offer the most stability on the water. All three options are sit-on-top style. Sit-in kayaks really can’t compete with the stability of sit-on-top models, so I passed over them when writing this article.

Each of these kayaks are in different price ranges. You’ll find the cheapest option first, followed by the moderately priced kayak and the most expensive option last.

Anyone who tells you that affordable, stable fishing kayaks don’t exist really needs to check out the Vibe Kayaks SkipJack. This is absolutely one of the best values in the industry.

First of all, this thing is LIGHT. The whole thing only 46lbs, making it super easy for one person to load into a vehicle or carry short distances to water. The only thing that makes it somewhat hard to handle out of water is its width. Not a big deal though, because you want that extra width for stability in the water.

You may think that lightness would be a detriment to stability, but the SkipJack’s wide design is actually still very stable. Compared to other relatively small kayaks, the SkipJack gets really high marks here. Side to side movement is minimal, even with quite a bit of movement from you.

Here’s a video from Vibe. It breaks down the Skipjack’s features and shows you some cool action shots:

For only being 9ft long, 32″ wide kayak, the SkipJack tracks surprisingly well. This is the one area that I expected it to struggle, so it was nice to see that it does a good job getting around.

Even larger, heavier fishermen will find that the SkipJack can support them while retaining pretty good maneuverability. You can see that for yourself in the video above when the guy pulls a huge striper out of the water and up onto the kayak.

The only knock on the SkipJack is that the seat often slides around a bit and there doesn’t seem to be a good fix for it. Really, the e thing to do is to simply replace the seat with something else. A simple seat replacement isn’t a big deal at all when you’re getting a kayak this solid for such a good value.

Other than the small gripe with the seat, this is a well-designed, well-built kayak. Build quality is as good as you’ll find for this money and I think almost anyone will be very happy with it. Customer service is also awesome with Vibe.

If you’ve ever been on small, affordable kayaks, chances are good that the SkipJack’s stability will be a pleasant surprise.

NuCanoe is a great company and they make a great kayak. Their Frontier 12 is one of the most stable kayaks for any amount of money. You can spend more, but you’ll be hard-pressed to find a more stable kayak for fishing.

The Frontier 12 is actually designed to be a hybrid fishing and hunting kayak. This explains why NuCanoe built it to be so ridiculously stable in the water. Fishing gear is one thing, but no one wants to flip all of their hunting gear into the water.

Seriously, this thing is crazy stable. I actually found a YouTube video of a guy who filmed himself intentionally trying to flip his Frontier 12. He actually throws himself off before he manages to flip the kayak.

I don’t know who this guy is, but he does a really great job of showing you exactly how difficult it is to flip the Frontier over. Pretty impressive.

Whether you want to sit or stand, you’ll be in good shape.

NuCanoe build quality is superb. It was founded by the guy who also founded Ocean Kayak. He made sure that NuCanoe products were purpose-built for the outdoors, so you don’t have to worry about getting a poorly designed kayak with a fishing label on it.

It’s also worth noting that the Frontier 12 is very customizable. You can configure it just about any way you want, whether you go single or tandem. You can also add a variety of motors to it. The transom fits a pretty wide number of options.

You really can’t make a list of kayaks without an appearance from Hobie. It’s a rule, I think. Buying a Hobie means dropping some coin, but you know from the start that you’re going to get an amazing kayak when you do.

The Mirage Pro Angler 12 is a beast of a fishing kayak. It’s uber stable and it’s solid as a rock. You can comfortably fish this thing in the open ocean without thinking twice about it.

The most noticeable feature that the Mirage Pro has over the other two kayaks on this list is the paddle system. And when it comes to paddle kayaks, Hobie is one of the best. The MirageDrive 180 paddle system can you in any direction, hands-free. This is huge for serious fishermen, especially for those who like to fish around mangroves or structure.

Here’s a good video from Hobie where you get to see this bad boy in action:

The H-rail system is comprised of two rails that run down the sides of the kayak and are designed to work with all sorts of Hobie attachments. You can attach everything from cup holders to tackle boxes to rod storage.

The Mirage Pro Angler 12’s seat is a thing of beauty. It’s one of the most comfortable kayak seats ever made. It’s also adjustable, allowing you to raise it up higher or lower depending on your preference.

Overall, this is obviously not a cheap kayak, but it’s worth every penny if you have the budget for it. It’s a battleship of a kayak and it brings maximum stability, comfort, and fishability.

There are a lot of good kayaks out there, but I really feel that these are the three most stable, most fishable kayaks in their respective price ranges. You can’t go wrong with any option here.

If your budget is tight, go with the SkipJack and save yourself some cash for extra gear.

The Frontier is a great step up from the SkipJack and its price is in a really sweet spot for how many features it offers. It’s just about as stable a kayak as you’ll find for any dollar amount

Jumping up to the Hobie means spending quite a bit more, but you get a ton of features. The Mirage really is a fishing machine that compromises on nothing. Also, the paddle system is a game changer and shouldn’t be overlooked.

So, there you have it! Hopefully you’re one step closer to finding the ‘yak of your dreams. Let us know what kayak you think is the most stable fishing platform. And definitely let us know if you end up with one mentioned here!