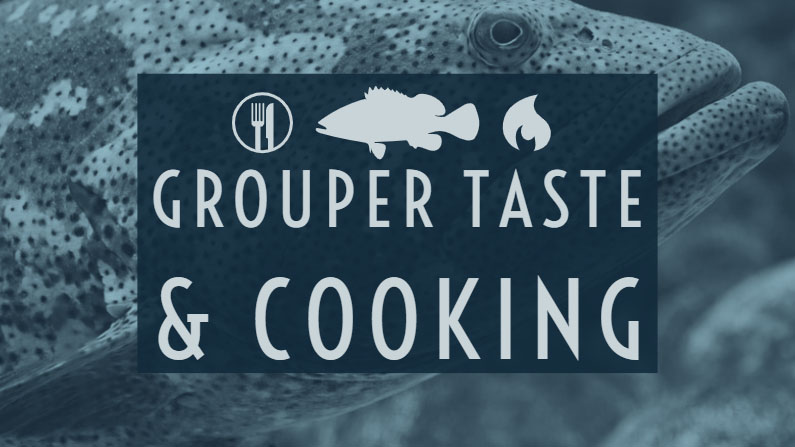 Fresh grouper is highly sought-after both by restaurants and by individuals looking to make a good meal. There’s no doubt that it is considered to be one of the tastiest fish in the ocean.

This guide will tell you everything you need to know about grouper flavor, texture, and how to cook it.

Table of Contents hide
1 What does grouper taste like? – The Short Answer
2 The Quick Culinary Guide to Grouper
3 Conclusion

Grouper meat has a mild taste and a unique texture. The meat is firm with a relatively high moisture and oil content. It comes apart easily and in large flakes with nothing but a fork. The flavor is generally sweet, with the red grouper being a bit sweeter than black grouper.

That’s the short and sweet.

We’ll get a little bit further into the details to fully detail what grouper tastes like and the preferred preparation methods.

The Quick Culinary Guide to Grouper

Here’s a short guide to everything you need to know about eating grouper. It covers everything from flavor and texture to ideal preparation and cooking.

All grouper species are considered by chefs to have an ideal flavor for a number of dishes and preparation styles.

Grouper has a relatively mild flavor with a hint of sweetness. The level of sweetness can vary among the different species of grouper. (We’ll cover those difference further along in the guide.)

Overall, most will say that grouper flavor falls about midway between that of a bass and a halibut.

Grouper meat has a unique texture when compared to most other commonly eaten fish. It is admittedly difficult to describe to anyone who has not tried it.

When cooked, grouper meat will be white and opaque. It is a firm meat, but it comes apart easily with a fork. The flakes are quite large for such a mild-tasting fish.

Buttery, smooth, firm, and tender would be the best way to sum up grouper’s texture in a few words.

Depending on who you ask, there is little difference or substantial difference from one grouper species to another in terms of food quality.

In our opinion, the variation between group species is small, but still notable enough to warrant some attention.

Red grouper is the most common species found within the American seafood market. In fact, about 70% of the entire American grouper harvest is made up of red grouper. Generally, those who prefer red grouper do so for its slightly milder and sweeter taste. Red grouper market size most commonly ranges between 5lbs to 17lbs.

Black grouper is the second most common species of grouper in the American seafood market. It is very similar to red grouper, but it does tend to be a bit firmer. Truthfully, all but the most experienced seafood pros can tell the difference between red grouper and black grouper once the skin has been removed. Black grouper market size is right around 20lbs.

Gag grouper is a separate species from black grouper, but it shares its traits to a degree that makes any differences negligible at best. You’ll commonly see gag lumped in with black in the seafood market due to its very similar flavor and texture.

There are many other species of grouper, but they are not nearly as common in the market as those listed here. The vast majority of what you’ll find in restaurants or stores will be a variety of red, black, and gag grouper.

For salmon grouper (bocaccio), take a look at a the complete guide we wrote specifically for that species. It covers everything you need to know about catching, cooking, and eating salmon grouper.

How to Clean a Grouper

All grouper are fairly substantial fish with quite a bit of meat on their bones. This makes for a high yield of accessible, edible meat. Black grouper have an especially high meat yield in relation to their weight. This is due to how small their heads are when compared to the heads of red grouper.

Filleting a grouper is very straightforward, but there are a few extra steps to get the most out of your fish. Anyone who has some basic experience with cleaning a fish shouldn’t have any problems here.

To clean a grouper, all you really need is a sharp knife. A pair of pliers is helpful, but not required.

Start by making your first cut right where the filet begins, just as you would with any other large fish. Turn your knife and follow the bones as closely as possible, keeping your knife tilted slightly downward as you go.

Once you have your filet, move on to the rib meat. Grouper ribs are large, making this process fairly simple. Simply use your knife or boning shears to get in between the hard to reach areas.

The last spot you’ll want to hit is the grouper’s “cheeks”. This can be the most confusing part, but it’s easy once you’ve figured out where to cut. Feel around on the side of the grouper’s head (cheeks). You’ll find a fleshy area that runs from right in front of the gill to right next to the grouper’s eye, following along the line of the mouth. Turn your knife sideways, angle down slightly, and work your way across. Don’t worry about cutting around it. Once you make it to the area next the grouper’s eye, simply flip the cheek out and peel it off of the remaining attached skin.

Thanks to the strong grouper culinary profile, they are a very flexible fish for cooking. There is a wide variety of ways to cook and grouper pairs with many different flavors.

Arguably the best thing about cooking grouper is that the meat is very forgiving. This is yet another benefit of the high oil and moisture content within grouper meat. While many mild-tasting species of fish are very easy to overcook, it is much more difficult to overcook grouper. The extra oil locks in the moisture and protects it from drying out.

Now, that’s not to say that it’s impossible to overcook grouper. Overcooking is definitely possible, but it’s much less common than it is when dealing with flakier, drier fish like snapper or sole.

There are tons and tons of ways to cook grouper and there’s really no right or wrong answer. Some of the most commonly preferred preparation methods are a simple blackening or grilling. Frying is also a good option, both in a pan or in a fryer. Grouper sandwiches are one of the most well-liked seafood staples in coastal areas and are always a good choice.

The immense popularity of grouper makes it extremely easy to find endless recipes in cookbooks and all across the web. If you’re an adventurous chef, the forgiving nature of grouper meat makes it an ideal choice for trying out new recipes and seafood creations.

If you’ve made it this far, you know just about everything you need to confidently order grouper at a restaurant or prepare it yourself at home. It really is one of the tastiest fish on the menu and I’ve known of plenty of seafood skeptics who still enjoy a good grouper filet.

Let us know where you think grouper ranks in the seafood world. Or just tell us some of your favorite recipes!