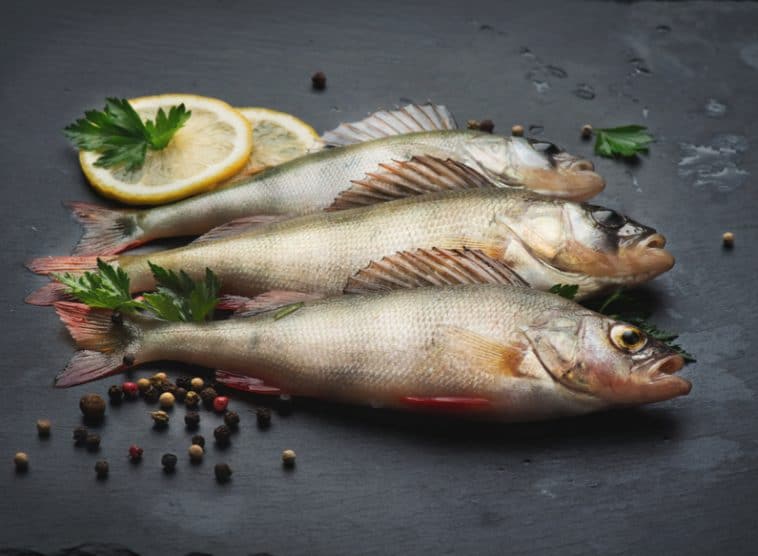 Wondering what perch tastes like and how to best cook it?

Even though perch is a common fish, there’s often confusion as to what exactly it is and how it fares on the table.

Since there are a number of species of gamefish that fall under the blanket term “perch”, many people don’t know exactly what to expect with when they see it on the menu. There are some slight differences from, species-to-species, but they’re very similar from a culinary standpoint.

The perch boasts white flesh that has an excellent flavor with a sweet taste and firm crumbly texture. It has a flavor that is mostly likened to that of the walleye but with more appeal.

The perch fish boasts white flesh that has an excellent mildly sweet taste and firm crumbly texture. It has a flavor that is mostly likened to that of the walleye but with more appeal.

The diet of the Perch comprises everything from invertebrates to insects and tiny fish species. Without a doubt, its varied diet plays a role in its culinary properties.

The Perch is one of the best-tasting freshwater fish worldwide, which could explain why it’s always in demand. It has an almost translucent pinky flesh and does not have an apparent fishy smell. When cooked, the perch taste is mildly sweet, and it gives that great mouth feel you can’t find in several other species as the tender flakes delicately break down upon every bite.

If you have never tasted the perch, you will likely be pleasantly surprised. Not only does it have a great flavor, but it also goes well with most of the dishes you can prepare without significant changes in that flavor.

The Perch’s flesh is said to be soft, and the texture is believed to be smooth and flaky when cooked. The lean and moist fillets from this freshwater fish have a firm texture that is stable at different cooking temperatures. That means that it does not limit the other methods you can employ to cook without damaging the soft and flaky feel of the fillets.

There are three types of Perch available in American waters, including the Silver Perch, White and Yellow Perch. In terms of taste and flavor, only slight differences exist, but they are generally the same.

Yellow Perch is the most common species of freshwater fish found in North America mostly in lakes and the south of Canada. It is regarded as the best panfish around the world. It’s widely reared in ponds to meet its ever-increasing demand thanks to its excellent moist, mildly sweet flavor. There are considerable differences in fat and protein content between the pond and wild Perch, although the taste is the same. However, some people will tell you that Yellow Perch is the most delicious of the three perch species.

The white Perch is characterized by a silvery body marked with dark lines that run longitudinally. A mature white perch can be as long as 19 inches, weighing about 1 pound. This type of Perch is mostly found in the waters between Scotia and South Carolina, although large shoals can be found in the Hudson River going to the Chesapeake Bay.

Silver perch is another notable species in the American diet, although they are the smallest. The little critters are also called sand perch and are related to the redfish. The Perch mostly hangs around in creeks and sea grasses on the eastern coast. Although they are relatively small in size, they are a great dish and are easy to catch.

Where to Find Perch

Perch care freshwater fish, therefore, will always be found in such waters. However, they tend to inhabit weedy areas, underwater wrecks, inlets, around bridges, and among reeds. This type of fish forms schools that swim together, with shoals of the larger ones preferring deeper waters while the smaller ones are mostly inhabiting shallow waters.

Perch’s availability in a particular location is also dependent on water temperature, and mostly they like temperatures between 63 to 75 degrees. Where temperatures are favorable, they can be found in the muddy or sandy bottom of lakes.

If you are fishing for Perch, the best place to find them is in open water near the shore and upriver, especially between March and November. You can also find them downstream where there are deep channels during the winter.

Some of the most popular perch habitats in the US include the Chesapeake Bay in Maryland, the shoal lake in Manitoba, the Devils lake of North Dakota, the Mississippi River, particularly the Wisconsin region, Lake Gogebic in Michigan, and Lake Waubay in South Dakota.

How to Catch Perch

Catching perch is one of the easiest things you can embark on if you know where to find them. The first thing is to get the fishing gear ready, including a fishing rod of about 6-8 pounds. The fact that Perch are small means no heavy equipment is needed. Taking a cooler or a stringer with you will be an added advantage if you plan to catch several of them.

The best baits for catching perch include minnows and larvae, although pieces of crayfish would still do. Alternatively, you can use lures, including jigs, plugs, and spinners, to attract this fish. After gathering all the above, it’s time to go hunting for one of the most delicious fish meat.

Perch prefer deep waters in areas that offer shade against sunlight. You can throw your bait and wait patiently for a Perch to swallow the bait. You should feel a slight tap and the line moving once it has adequately hooked and is trying to run away. Slowly pull the fish out of the water and place it in the cooler.

How to Clean a Perch

Have you ever cleaned a perch? If not, here are a few simple steps you can follow to get the fish ready for cooking successfully. All you need is a cutting board and a filleting knife at your disposal.

Holding the fish against the cutting board with one arm, make an incision from the top of the gill plate running down and another running along the fish’s length to the pectoral fin, ensuring you don’t cut the bones.

Having done that, you should be able to lift the fillet from the backbone and, using the curved tip of the knife, cut the fillet along the outer rib surface towards the belly. This gives you a boneless fillet.

Turn over the fish and carry out the same steps as above for the other side.

If you want to remove the skin, place the fillet skin in contact with the cutting board. Hold one end of the fillet and slowly pierce a small portion exactly between the skin and the flesh. It would be best if you had a very sharp knife for skinning. Slant the blade so that it runs horizontally as you carefully separate the fillet from the skin. The fillets are now ready for cooking.

How to Cook a Perch

There are several ways you can prepare a mouthwatering dish with perch fillets. You can fry, bake, grill, sauté, or poach. However, this recipe below will guarantee you one of the tastiest dish perch could offer.

The first step is to mix the flour, salt, and paprika. After this, mix the egg and milk and whip to blend well.

Place a sizeable amount of butter in a frying pan and allow it to heat. Meanwhile, immerse the fillets in the egg-milk blend and then transfer to the flour, salt, and paprika mixture.

After dredging the fillets in the flour, they are ready for frying. Taking care not to splash, place the fillets in the heated butter and fry until they turn brownish. After removing them, ensure you allow them to drain excess butter over a mesh or place over a paper towel to absorb the butter. The fillets are ready to serve.

For centuries, the Perch has intrigued fish enthusiasts due to its mildly sweet taste, not to mention the smooth and tender texture that offers an excellent mouth feel. While it is a great rival to the much-revered walleye, the Perch has always produced table fares worth the attention of fabulous cuisines and great fish recipes. It is easy to find and catch with little hassle while cleaning and cooking. Try out this amazingly outstanding delicious fish, and you will never look back.