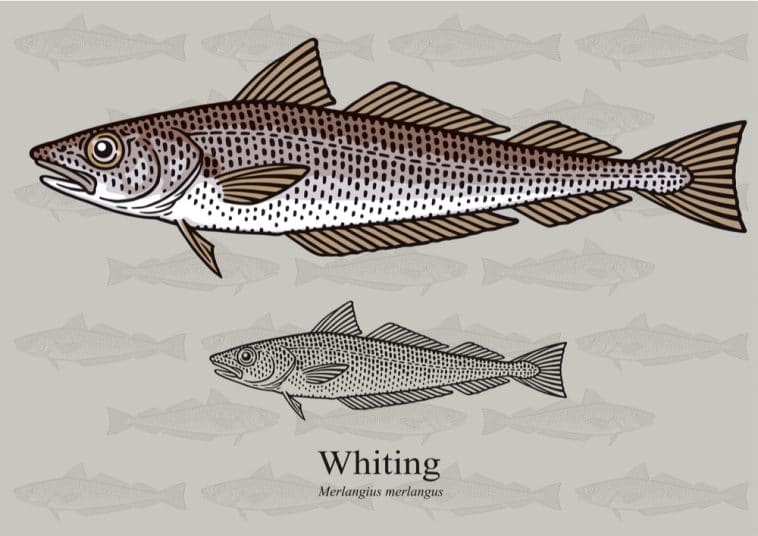 Wondering what whiting taste like, whether or not they’re good eating, and the best way to prepare them?

This guide will tell you everything you need to know about the culinary profile of whiting, along with tips on how to catch, clean, and cook them.

Table of Contents hide
1 What do Whiting Taste Like?
2 Whiting Texture
3 How to Cook Whiting
4 How to Clean Whiting
5 Species Differences
6 Where to Find Whiting
7 How to Catch Whiting
8 Conclusion

Whiting has a sweet, delicate flavor and its meat is light, firm, and lean. Whiting flavor is somewhat like that of a flakier cod, both of which belong to the Gadidae family. Not only is this fish a rich source of proteins and vitamin B, but it is also a great table fare.

The lean white meat is firm with very low oil and cholesterol, unlike several other species. If you have never had a bite of this fish, the whiting flavor in its delicate balance is quite distinct from the commonly popular fish.

Mind you, the whiting is a carnivore, with adults feeding mostly on crabs, squids, octopus, shrimps, worms, and several other small invertebrates. Without a doubt, such a diet is bound to impact heavily on whiting flavor and nutritional profile.

Although the whiting has a soft but firm, lean flesh, its delicate texture lies in a fine line between soft and flaky.

Most people complain about the fish becoming mushy when cooked. But that is mostly the result of improper cooking. That is why you need to be careful when cooking as the temperature has a considerable effect on the overall texture.

When cooked correctly at the right temperature and for a short time, you will fall in love with the soft, flaky feel on your mouth.

Whiting has a low oil content (much lower than something like grouper) and water retention capacity, especially when filleted. This could explain the reason behind the delicate texture.

How to Cook Whiting

If you want to make the best dish with whiting, frying it is known to be the best. It does not matter whether you deep or shallow fry the fish; the uniquely sweet whiting flavor is best felt when fried.

This is an easy way to cook whiting as it does not require one of those complicated recipes that change the real whiting taste entirely.

Cooking the whiting whole helps retain much of its moisture, which significantly influences whiting flavor development. Alternatively, if the whole fish can’t fit in your frying pan, you can cut the fillets into suitable sizes before frying.

When your fish is ready for cooking, heat oil to about 375 degrees, ensuring that it does not reach smoke point. You should turn over the fish if you are using a pan, but you will be good to go if you have a deep fryer. It would help if you let it cook until it turns brownish.

Small-sized fish takes no time to cook, so be careful of cooking too slowly or under temperatures higher than 375 degrees results in mushy flesh.

Although frying is considered the best method of cooking the whiting, you can also use other ways depending on your preferences.

How to Clean Whiting

If you don’t know how to clean whiting fish, it is comparatively easier than several other fish species. Most of the time, you will find that this fish is commonly eaten whole. That means that all you need to do is to remove the scales and the innards.

However, due to the delicate nature of this fish’s flesh, you should be careful when eliminating the scales to avoid tearing the flesh. Scaling it underwater makes it easy for the scales to come off, leaving your whiting clean.

To remove the gut, make an incision on the anus using a sharp knife then cut along the underside up to the gill plate. After removing them, clean up the whole fish.

At this point, you can go on and cook your fish as it does not require the removal of the skin. However, filleting can also be done.

A sharp filleting knife comes in handy for this purpose. Filleting is done by cutting from the anus running along the backbone to the head on either side. Some people prefer cutting off the head before removing the fillet.

This is followed by removing flesh under the ribs, ensuring the knife cuts against the ribs to avoid leaving too much attached.

As far as culinary use is concerned, there are no significant differences between the different whiting species you can find in the market today.

Also known as the Southern croaker, the southern kingfish is the one most of us are used to seeing in the market. It is easier to differentiate from the gulf kingfish as it is darker with about 7-8 vertical bands that are not as distinct. Unlike the gulf kingfish, the tip of their tail lacks a dark splotch.

The gulf kingfish or the king croaker, as is commonly known, is the biggest whiting you can catch. This one does not have the stripes present in the other two species and is characterized by a silvery body with a black mark on the tail’s upper edge. People call it the sea mullet in North Carolina and can weigh a maximum of about 3 pounds.

Similar to the southern kingfish due to the presence of vertical stripes, the rarest of the three whiting, the Northern kingfish is darker and has a more extended spine in the front of the dorsal fin, which is not the case with the other two.

Where to Find Whiting

Whiting fish generally thrives in surf regions and coast inlets, especially in their adult life. The round-bodied delicious fish is easy to catch, but you first need to know where you are likely to find them.

Whiting, especially the adults, migrate depending on water temperatures. When temperatures go down in central and southern Florida, they migrate to the north, returning when it gets too warm for them.

If you are fishing for whiting, their most common hang out is the surf. They tend to spend their time in channels formed when waves crash on sandbars. Whiting is demersal fish preferring the depths of the seafloor. They love sea floors composed of mud, gravel, rock, or sand.

If you have never been on a whiting fishing expedition, looking for this fish in shallow waters may be in vain. They love depths ranging from 100ft to 328ft, although they can also be found in shallow waters about 30 ft deep and up to 700ft below the surface.

The depths whiting can be found vary with age, with younger fish found mostly in shallow waters.

When they are about three inches long, whiting inhabit deeper waters and later move further deep and away from the shore when a year old.

How to Catch Whiting

If you have never gone fishing for whiting, there is nothing to worry about bringing such a distinctly sweet flavor on the dining table. The whiting diet comprises prawns, worms, shrimps, and squids, making them the best baits to lure them.

If you want to increase your chances of enticing them, using fresh live baits works wonders for these picky eaters. Blood or wriggler worms are the best. However, you must tactfully present the bait making sure to avoid scaring them away.

The hook size for catching whiting should be small enough to be hidden by the bait. Hooking a fresh prawn via the tail to allow it to move along the seafloor quickly fools the whiting for unsuspecting prey.

Once you set your bait and everything else, it’s time to wait for the big moment to bring the whiting on board. Whiting can be smart enough to bite the bait, crush it, and move on without a fuss.

It would be best if you were patient once you feel a tap on the hook. Let the fish have time to swallow the hook and start getting away so you can pull it out.

Using a bait feeder lets you allow the fish to move away hence hooking the bait properly before you can pull it out.

If you don’t have one, opening up the bail’s arm and letting the line to unwind freely from the spool is an excellent way to conquer the whiting.

If you are using a small hook, be sure to pull gently to prevent the hook from coming off a large fighting whiting. Don’t set the hook like you’re bass fishing with Bill Dance!

The whiting fish is arguably one of the most delicious and nutritious species you can find in the American market today. This fish is also easy to catch, clean, and cook, so you don’t have to worry about the hassle involved with species like the sheepshead.