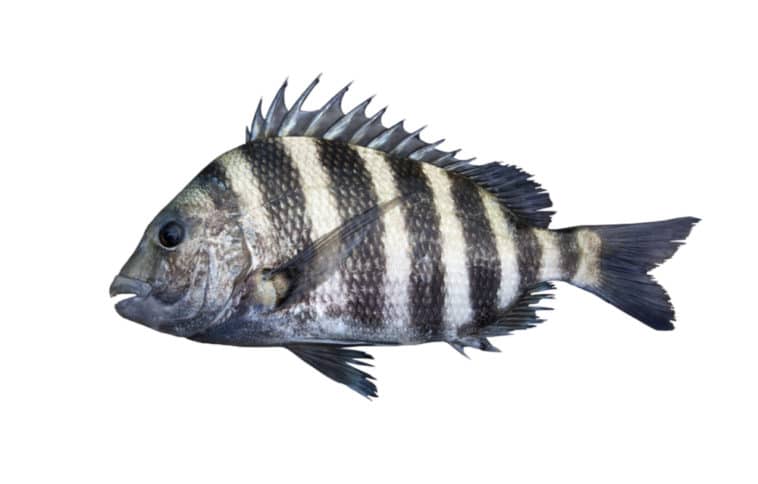 Wondering what sheepshead taste like, whether or not they are good eating, and how to cook them?

The short answer is that the sheepshead taste is actually sweet and delicious with a slight shellfish flavor. The varied diet for this fish makes it not just delicious but also very nutritious. The somewhat flaky and tender flesh is often considered to have a flavor that faintly resembles shellfish when cooked.

This quick guide will tell you everything you need to know about sheepshead flavor, along with how to cook it, clean it, and even catch it.

The Quick Culinary Guide to Sheepshead

Here is a brief guide to all that you need to know about sheepshead, including its taste, texture, catching, and cooking.

Most chefs would describe sheepshead as having a delicious shellfish flavor with the meat being firm, moist and oily. The taste is somewhat between a triggerfish (we have a guide to triggerfish too) and black bass but with a distinct flavor and texture. This fish’s excellent oil and moisture content contributes to its sweet, firm, and flaky feel on the mouth.

If you have never known what it means when they say garbage in garbage out, you would want to taste the sheepshead. The fish is omnivorous, meaning it has a wide range of a nutritious diet. It feeds mostly on shellfish and other crustaceans such as fiddler crabs, clams, barnacles, and mollusks.

Although sheepshead may not be the most pleasant-looking fish in the sea, it’s actually a very solid eating fish. Most people are skeptical about it due to its ugly head. To make it even worse are the sheepshead’s weird, humanlike teeth that help it scrape and grind barnacles from surfaces.

The sheepshead has a distinctive texture when compared to several other species of fish. Once cooked, the meat becomes flaky with a soft and delicate mouth feel. Unlike drier, flakier fish species, the sheepshead’s moisture and oil content give its flesh a compact and firm texture. That oil/moisture also has a positive effect on the fish’s flavor.

How to Cook Sheepshead

There are different ways you can cook sheepshead from boiling, grilling, baking, frying, and even roasting the whole fish.

But, the best way to prepare a sheepshead delicacy is arguably by baking since it’s easy to season the fillets. The fish fillets are cleaned, and the oven is heated to about 450 degrees. Seasoning the fillets with lemon juice, salt, and pepper makes a previously marinated fillet much more delicious.

Take a baking dish big enough for the fillets to fit and smear it with olive oil. Butter and herbs improve the shellfish flavor, especially when oregano and parsley are added. Don’t forget to add finely chopped onions. Before baking, add lemon juice to impart citric flavor to the meat.

The last thing is to bake the contents in the dish. While baking, you need to reduce the heat to around 350 degrees and cook for about 15 minutes maximum. Ensure the meat is tender and flaky before removing from the heat source. The baked sheepshead can be served with bread or whatever you prefer.

How to Clean Sheepshead

Although it’s one of the most delightful dishes you can place on the dining table, cleaning the sheepshead can be challenging for most people. Considering the several spikes on the back of this fish and the hard ribs even with the best filleting knife, the task makes some anglers throw it back into the waters. But those are the folks who have never had a taste of this weird looking fish.

Filleting the sheepshead involves some steps. First, you need to scrap the armor like scales on the thick skin. Then, with the knife held at an angle and starting at the head’s junction, cut in a vertical angle going down through to the backbone.

The other cut should be made above the lateral line going back along the line then down to the anus. Turn the fish to have its back facing you and start cutting close to the backbone starting from where you made the vertical cut. The knife should cut through to the spine and down to the ribcage. However, leave the cut flesh attached at the tail.

The next thing is to cut any flesh still attached to the skeleton of the fish. After detaching the fillet, cut it free from the tail.

The pin bone is removed by cutting a small portion of flesh along the lateral line. The same is done for the other fillets.

As you can see, when it comes to how to clean sheepshead, most people find it rather tedious, but it’s delicious and sweet flavor compensates for the hassle.

There are no considerable species differences observed as far as sheepshead is concerned. Nevertheless, some species of fish found in marine waters can easily be mistaken for a sheepshead. For instance, the black drum has dark vertical stripes like those of the sheepshead. The only difference is that they are smaller and lack the sheepshead’s characteristic humanlike teeth and sharp spines.

The freshwater drum known as the gaspergou in Louisiana is also confused with the sheepshead. In contrast, the sheepshead of the species cyprinodon variegatus is unrelated to the sheepshead we are talking about here-the Archosargus probatocephalus species.

Where to find Sheepshead

If you are looking forward to going fishing for sheepshead, you must know where to find them. The convict fish is so named because of the dark bands that run vertically to its body, and the fact that it’s famous for stealing baits. It can be found in the waters on the East Coast of the US, especially in North Carolina and Florida, the Gulf of Mexico and the Atlantic.

The best place to look for sheepshead is around surfaces such as jetties, piers, pilings, old bridge pillars, and rocks as they love scraping food particles from these surfaces. Mostly, they will be found ten or more feet below.

From December to April, sheepshead loves to conglomerate ready for spawning, and the highest numbers can be expected between March and April. However, these species of fish can be found throughout the year in the gulf coast.

Sheepshead migrates annually for spawning moving from estuaries to offshore territories. Generally, this fish species can be found in areas where small invertebrates thrive, offering them an excellent source of food. They love hanging out around mangrove roots, oyster reefs, and physical structures, including piers, docks, pilings, and seawalls. At other times, they can be found in sea grasses and sand flats on shallow waters.

How to Catch Sheepshead

Catching the sheepshead can be tricky for anglers, mostly if you are not used to these fighters. Their mouth’s morphological characteristics make it hard for them to be lured by most of the baits used to catch other species. The mouth is small with humanlike teeth adapted for crushing the shells of certain crustaceans such as oysters, crabs, and barnacles.

Catching these funny looking yet delicious fish requires a small circle hook that can fit in their mouth and the bait. Unlike other aggressive species while capturing the prey, the sheepshead is gentle and can snatch the bait and disappear unnoticed. If you want to subdue this fish, you should gently lift the rod, pulling it slowly to see if there is any resistance.

The baits used for catching sheepshead include shrimps, clams, and squids, but most anglers use the fiddler crab. You must ensure the bait is appropriately hooked; otherwise, it will be crushed, sucked, and the hook spit long before you realize. This is genuinely a convict when it comes to bait stealing, although it also requires patience to ensure it is appropriately hooked. Ensure the hook is sharp enough to penetrate the hard and body surface of the sheepshead’s mouth.

If you are used to artificial baits, then be ready to be disappointed as you are not going to fool around with the sheepshead.

Despite the lousy image sheepshead has among anglers and other fish enthusiasts; it has a great taste that leaves you asking for more. This seemingly ugly creature known for its notoriety in stealing baits feeds on shellfish, crabs, and other crustaceans, a diet that imparts on its flavor and taste. While it may be a little tricky to catch and clean the sheepshead, cooking it is much easier. If you love shellfish and fish that can emulate its flavor, this is a great choice.