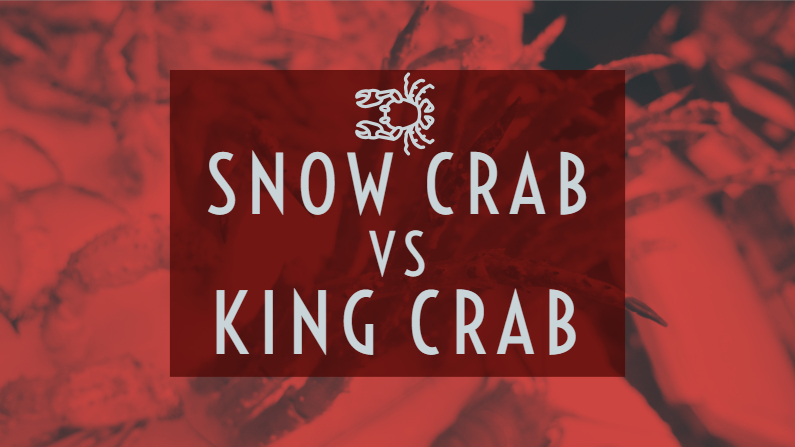 Seafood lovers will all agree that there are few things better than a plate of fresh crab, especially if it’s the good stuff. King crab and snow crab are two of the most popular options and you can find them at all of the best seafood spots.

Both are delicious, but there’s a surprising lack of information out there for folks who are wondering what the real difference between the two species.

This guide will tell you all you need to know about king crab vs snow crab. From taste and food quality to habitat and fishing, we cover all of it here.

King crab and snow crab are both excellent for eating, but they do have a few differences. The king crab is a much larger species and is much more expensive for consumers while the snow crab is smaller and much more affordable. King crab meat is considered by most to be the superior choice.

That is the quickest, most simple comparison you could possibly make between these two crabs. Realistically, there is much more information necessary to fully and accurately compare them.

The most important part of the comparison is the distinction between the different species of snow crab and king crab alike. Each species contain multiple subspecies and there are some big differences between them.

It’s somewhat of a surprise for many people to find out that there are actually several species of king crab. Many restaurants and seafood markets don’t distinguish between these subspecies. The differences are apparent in everything from look, taste, and the areas in which they are harvested.

There are three main types of Alaskan king crab: red, blue, and golden. Each species is commonly harvested in different areas within Alaskan waters.

Red king crab is the Cadillac of crab and it is easily the most sought-after species of crab in the world. When you hear someone extol the virtues of king crab, this is the standard they are referring to, whether or not they know it.

The red king’s meat is considered to be the best crab meat in the world by almost all commercial standards. The trademark feature of the meat is its stark white coloring with bright red edges. When you envision a picture-perfect image of king crab being served at a five-star restaurant, you’re envisioning the red variety. Compared to other king crab varieties, red king crab meat tends to have a bit more flavor.

The common fisheries for red king crab are Alaska’s Bristol Bay and Norton Sound. The population has been well-managed, making red king fairly abundant without concern of over-fishing.

The blue king crab’s meat tends to be milder than that of the red king’s, but they are generally very similar. In fact, many markets will often label blue king as red king on purpose or by mistake. Only the most astute buyer will be able to tell one from the other on appearance alone and only the most seasoned crab-eaters would be able to taste a difference.

Blue king crab is most commonly harvested in Alaskan waters near the Pribilof Islands and near St. Matthew Island. Declining numbers have made the blue king a species that isn’t directly targeted by commercial fishermen. However, they are still legal to harvest and are kept by fishermen targeting other species.

The large numbers and availability of golden kings have led to their increasing presence in restaurants and markets as a “fresh” option. This is typically uncommon for king crabs in general, as the meat is extremely delicate and needs to be quickly frozen to preserve quality.

The dominant golden king crab fishery spans the length of the Aleutian chain of islands.

Like king crab, there are multiple species of snow crab. Both are much smaller than king crab.

The two species of snow crab are opilio and bairdi. They share the same natural range, but are different in size. Crab connoisseurs will also tell you that one is a lot better eating than the other.

If you’ve ever been to a seafood buffet (or almost any seafood restaurant that serves a lot of crab) you’ve seen opilio. It’s by far the most abundant snow crab and it’s not even close.

The opilio snow crab is smaller than , weighing at around 1.5lbs to 2.5lbs. Legs are commonly sold in clusters, precooked and frozen.

Opilio is most commonly harvested all over Alaskan waters.

Bairdi snow crab is much less available than opilio, but it’s considered by many crab enthusiasts to be the best crab in the world, even over king crab. If you’ve ever seen snow crab labeled “Tanner crab”, you’ve seen bairdi. This is the trade name associated with the species.

While still much smaller than king crab, bairdi crab is significantly larger than opilio snow crab. Not only is there more meat, but the meat generally has a better taste and texture compared to opilio.

The whole area of the Bering Sea holds bairdi, but the harvest is much more limited compared to opilio. Anyone who is familiar with bairdi knows that they should jump on the opportunity to purchase it if and when they have the chance.

Now that we’ve covered the different types of king and snow crabs, we can better compare them.

On the other hand, bairdi snow crab can absolutely hang with king when it comes to taste and overall quality. Many Alaskan locals will tell you that they actually prefer bairdi. The problem is that bairdi is so hard to come by, especially for folks who live nowhere near that part of the world.

Bairdi is sweeter than king crab and has a lighter texture. It’s generally sold pre-cooked and ready to eat. Leaving it cold is the preferred way to serve, but reheating is fine as long as it’s done with care. Too much heat and it will double-cook the crab and dry it out.

Both snow crab species have less fat and a more fibrous texture than any of the king crab species.

Even with notable differences between snow crab and king crab, the cooking/serving methods are essentially identical.

The moral of the story is that king crab and bairdi are both top-notch and stand head and shoulders above opilio in terms of overall food quality. And if you have the luxury of readily available bairdi, it will often rival king crab at a fraction of the price.

How to Cook Snow & King Crab

Whether you’re dealing with snow crab or king crab, chances are good that most of the work has been done for you and the meat is already cooked.

Almost all Alaska-caught crab, regardless of species, is cooked and flash-frozen immediately after capture. Fishermen do this to preserve freshness and keep the meat from going bad. Crab meat goes bad extremely fast and it’s actually pretty rare to have the option of fresh crab that has never been frozen.

I know what you’re probably thinking- that you know of several nearby restaurants that serve fresh king or snow crab daily. The truth is that in almost every instance, the crab has been previously frozen. Don’t worry though, as that’s the way it’s supposed to be. Properly cooked and frozen crab is very high-quality.

Since you’re dealing with pre-cooked crab, your goal should be less about “cooking” and more about simply reheating to the proper temperature. It’s a simple procedure, but it’s worth taking the care to do it right. The last thing you want here is to overcook your crab and dry it out.

My preferred method of reheating crab is always steaming. If done properly, it’s gentle enough to heat the crab up to a good serving temperature without much risk of overdoing it.

Water and a steamer pot are all you really need and you really can’t go wrong if you do it this way. Just make sure you don’t get your crab too hot. It’s better for it to be slightly cold rather than too hot. About 5 minutes should do it in most cases.

And, of course, simple drawn butter is always the tried and true classic way to complete the finest crab legs.

Now that you’re well-versed in the differences between Alaska’s two heavyweight crabs, you should be able to make an informed decision next time you’re shopping around. It’s worth taking a moment to find out about your options whether you’re buying at a fine restaurant or a local grocery store.

You generally can’t go wrong if king crab or snow crab is on your menu. And while it’s very hard to top the highest quality king crab, it’s often possible if you have bairdi snow crab as an option.

What crab do you prefer? Give us your opinion, along with any tips or recipes that you like best!